The gateway to the teardrop island of Sri Lanka, Colombo, is a melting pot of cultures and boasts a rich colonial heritage. Often overlooked in the past, Colombo is now a destination in its own right and offers the perfect start or finish to any Sri Lankan itinerary. Traditionally the city served as a significant port on the ancient east-west trading route and Colombo’s architecture reflects its Portuguese, Dutch and British roots, blending colonial buildings and churches with modern shopping malls and high-rises. This cosmopolitan city is home to a number of must-visit landmarks including the Buddha-lined Gangaramaya Temple, the stunning red mosque Jami Ul-Alfar and the scenic Beira Lake. A trip to Colombo isn’t complete without a visit to Pettah, a local neighbourhood featuring a bustling open-air market. Immerse yourself in the sights, sounds and aromas of the bazaar filled with colourful silks, fragrant spices and tantalising street food. 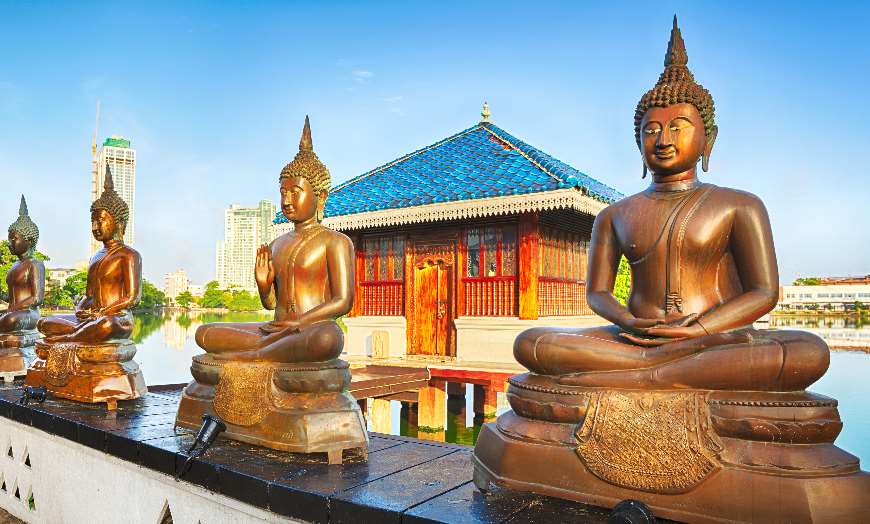 Anuradhapura, one of the ancient capitals of Sri Lanka, is one of the oldest continuously inhabited cities in the world. Chosen by King Pandukabhaya as the capital of the Sinhalese people in the 4th century, Anuradhapura was one of Asia’s most important cities with its substantial dagobas, many temples and wealthy monastic complexes. Nowadays, the city is now a UNESCO World Heritage site and famous for its rich collection of archaeological wonders and well-preserved ruins. One of the city’s most famed landmarks is the Abhayagiri Dagoba. This terracotta stupa that features beautiful carvings and an octagonal spire, dates back to the 1st century and was once one of the most colossal structures of the ancient world (along with the pyramids of Giza). Another place of significant importance is Mihintale, which is believed to be the birthplace of Buddhism in Sri Lanka. Now a pilgrimage site, climb to the summit to remarkable dagobas and along the way pass shimmering pools, ancient monastery ruins and rock inscriptions. 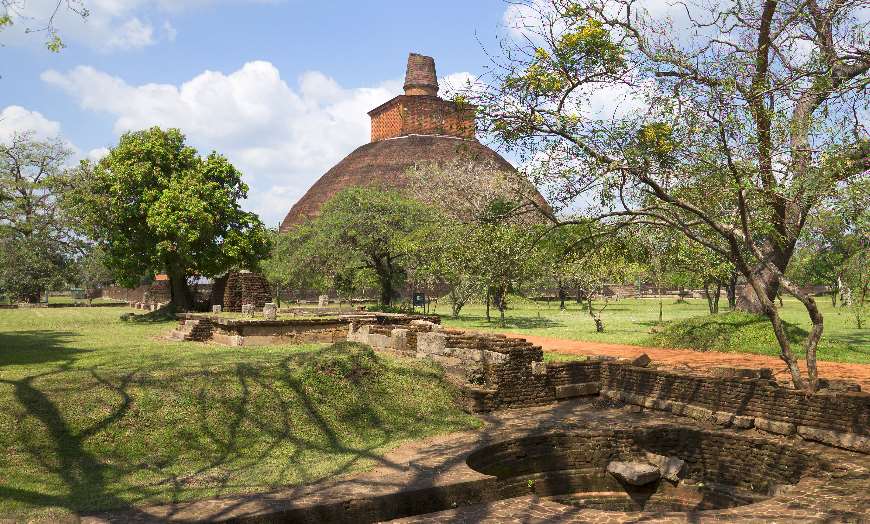 Galle is a city located on the southwest coast of Sri Lanka and is best known for the UNESCO-listed fort and old town. It is a must-see sight whilst in southern Sri Lanka and many visitors stay here in the beautiful heritage properties whilst exploring. Settled by the Dutch, Portuguese and British, the charming jewel that is Galle is one of the best examples of a fortified city built by Europeans in Asia that has been sympathetically maintained, even today. The exotic trading port and old town features beautiful Dutch colonial buildings, ancient mosques and churches and the famous lighthouse overlooking the turquoise ocean. However, it isn’t just Galle’s beauty and interesting architecture that draws visitors, many travellers are seduced by the city’s alluring ambience. Wander down the quaint cobbled lanes to soak up the atmosphere of the stylish cafes and charming boutiques, or hunt for some vintage deals in the Galle Fort Flea Market every Sunday. 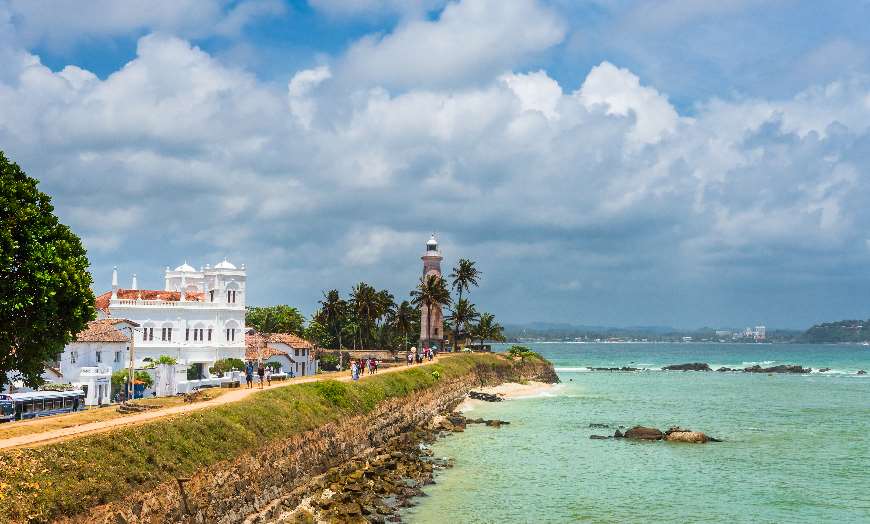 Kandy, the capital of Sri Lanka hill country, is one of the country’s most significant cultural and religious centres. This beautiful city is located on a plateau surrounded by emerald mountains centred around scenic Kandy Lake. Possibly the most famous reason to visit Kandy is to encounter the revered Temple of the Tooth, where the Buddha’s tooth relic is housed. Although you can’t actually see the tooth, a wander around the beautiful temples and shrines is worthwhile. The Peradeniya Botanical Gardens, a former royal pleasure garden is also a must-see. It features over 4,000 species and is one of the finest botanical gardens in the subcontinent. Culturally, Kandy has a lot to offer with traditional dance and music performances daily, fantastic street food and the home of the grand Esala Perahera annual Buddhist festival; a spectacle of musicians, jugglers, dancers, fire-breathers and lavishly-decorated elephants. 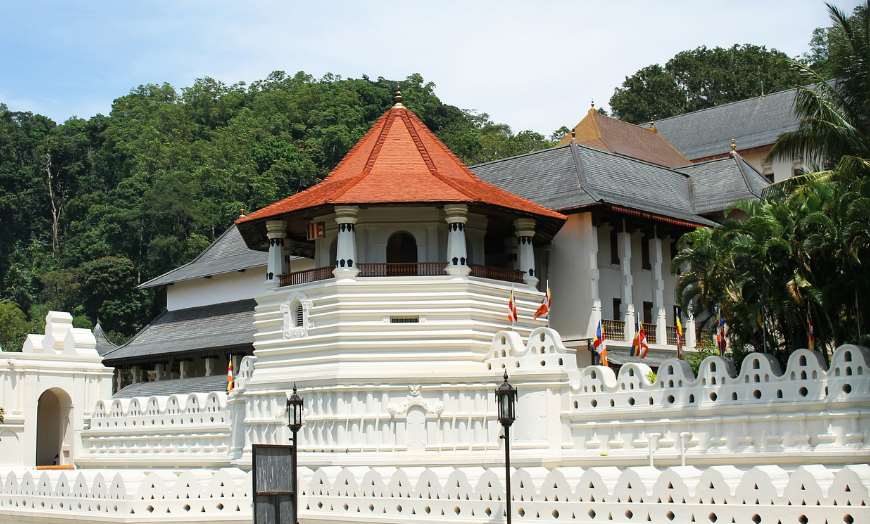 Temple of the Tooth in Kandy

The 19th century colonial hill-station of Nuwara Eliya dotted with English country-style homes, mock-Tudor buildings and pretty well-tended gardens, was a favourite summer retreat of the British during their rule. Sitting 2,000 metres above sea level and often shrouded in mist, Nuwara Eliya in the Central Province has a temperate, cool climate providing the optimum conditions for growing tea and is one of the best destinations in Sri Lanka to explore the vast and beautiful tea plantations. Nuwara Eliya is also close to Horton Plains National Park, home to lush cloud forest and endemic plants and animals. Take a hike to the dramatically located World’s End; this walk provides some of the finest, and far-reaching, views in Sri Lanka. Within the city of Nuwara Eliya take a scenic boat ride around the picturesque Gregory Lake, stroll through Victoria Park or explore the beautifully manicured gardens full of roses and orchids at the Hakgala Botanical Gardens. 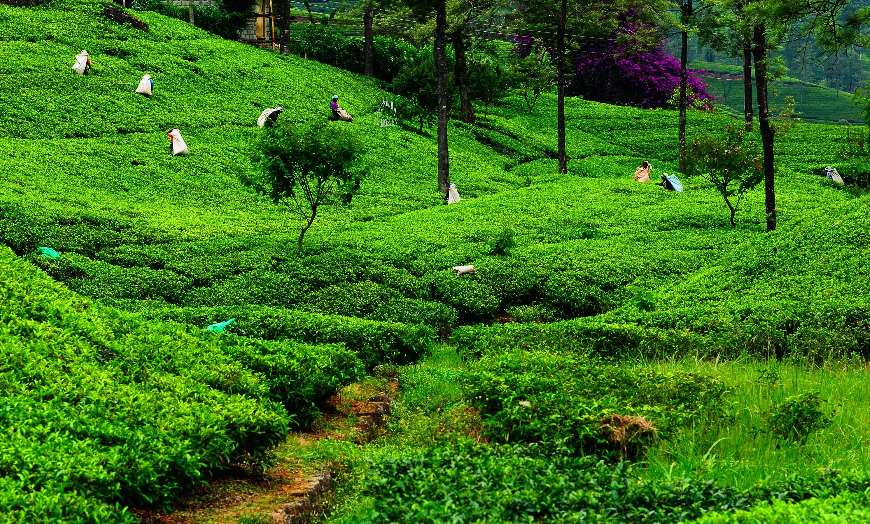 One of the earliest Indian Tamil settlements in Sri Lanka, the coming of the colonial era and Trincomalee’s magnificent natural harbour combined made this port city one of the subcontinent’s political and economic powerhouses. Situated on Sri Lanka’s northeast coast, Trincomalee is surrounded by beautiful Indian Ocean beaches such as Uppuveli and Nilaveli where visitors usually flock, but it is worth spending time beforehand in this charming and historical city. The colourful and medieval Hindi temple Kandasamy Kovil dedicated to Shiva that sits atop Swami Rock cliff is a Trincomalee highlight and also a great place to spot blue whales passing through the sapphire ocean. Other place of interest includes Fort Frederick, a fort built by the Portuguese in the 17th century, the revered Lover’s Leap cliff point and the vibrant Pathitakali Amman temple. 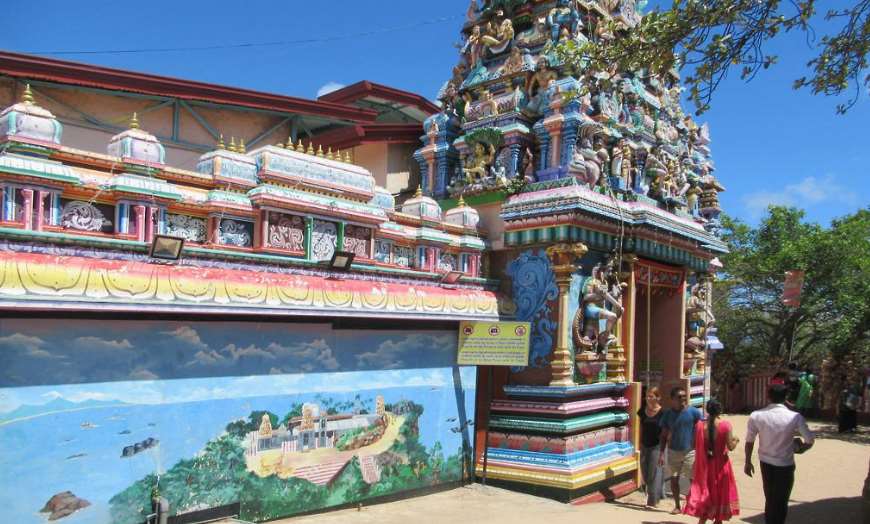 Whist technically not a modern day city, the spectacular Polonnaruwa features on this list as a royal ancient city in Sri Lanka. Declared a World Heritage site by UNESCO, this centre is a treasure trove of wonderful archaeological remains that give visitors a good insight to how the city looked in its heyday. The Quadrangle alone is enough reason to visit Polonnaruwa and is one of the finest collections of ancient buildings in Sri Lanka. The various temples and ruins are intricately detailed with pillars, steps and religious carvings. The Gal Vihara Buddha figures are another highlight in this ancient city. The site consists of four statues all carved from the same granite slab; these Buddhas are considered the pinnacle of Sri Lankan rock carving. Additionally the white Kiri Vihara Dagoba built for the King’s Queen back in the 6th century is worth a mention. Discovered by archaeologists after 700 years of neglect inthe jungle, the original white lime plaster of the stuba was still in perfect condition and should be a must-see on any Polonnaruwa itinerary. 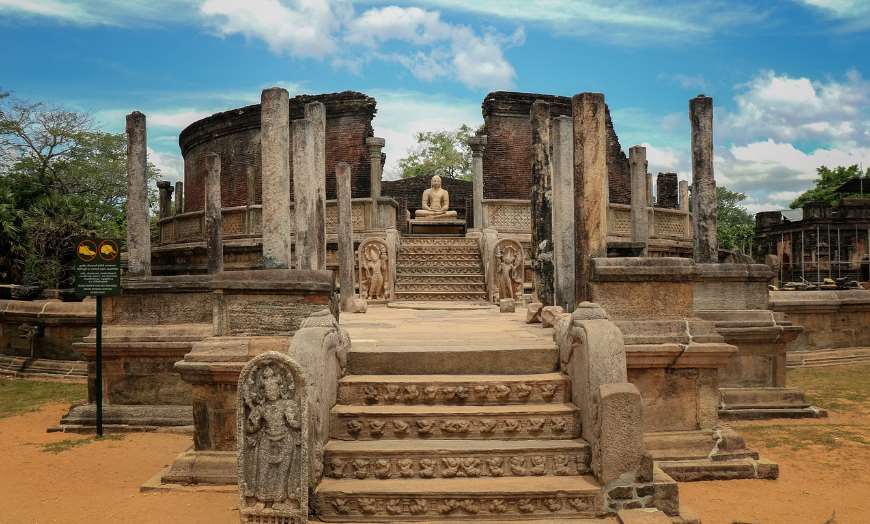 Located on Sri Lanka’s northern tip, Jaffna was out of bounds to foreign visitors until 2010 due to the civil war. The city is slowly re-opening to tourism but currently remains very much off the beaten track and provides an interesting alternative to the busier south. Historically, Jaffna was created as a port by the Portuguese, it was lost to the Dutch, who then lost it to the British in 1796. After independence Tamils and Sinhalese disputed the city. Today Jaffna is still a stronghold of Hindu Tamil culture and this has shaped the make-up of the city, and surrounding region. Whilst in Jaffna, the colourful Kandaswamy Temple is a particular highlight and is one of the most important Hindu temple complexes on the island believed to date from the 10th century. Other must-see’s in the city include the somewhat derelict Jaffna Fort, one of Sri Lanka’s oldest and largest, the interesting archaeological museum, St Mary’s Cathedral and the church of St James. 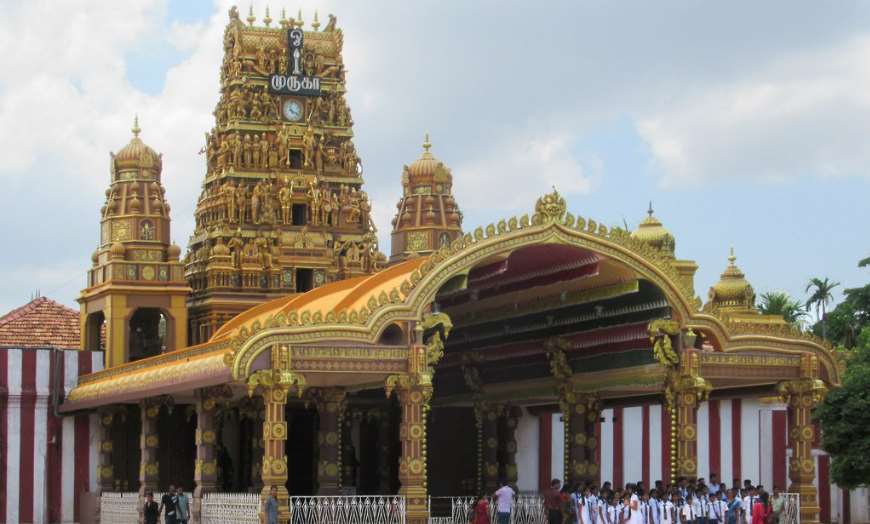 Steeped in history, Batticaloa on the east coast, is one of the islands lesser known cities after years of isolation and turbulence during the civil war. During this period Batticaloa and the surrounding area was a stronghold for the LTTE and was one of the most dangerous places in Sri Lanka at the time. Since the end of the civil war, Batticaloa’s mellow vibes and magical position make for a very pleasant visit and refreshing change to the busy west coast cities. Overlooking the glistening Batticaloa Lagoon and the Indian Ocean, the sliver of land that makes up Batticaloa results in a spectacular setting. Within the city there are some wonderful landmarks and attractions to visit such as the old Dutch fort, Batticaloa lighthouse and the interesting Kattankudy Heritage Museum, as well as learning about its fascinating yet grisly history. For beach lovers, head 30-minutes north of Batticaloa to the east coast gems of Passikudah and Kalkudah where you will find ample swimming spots, palm-fringed bays and an abundance of excellent seafood restaurants. 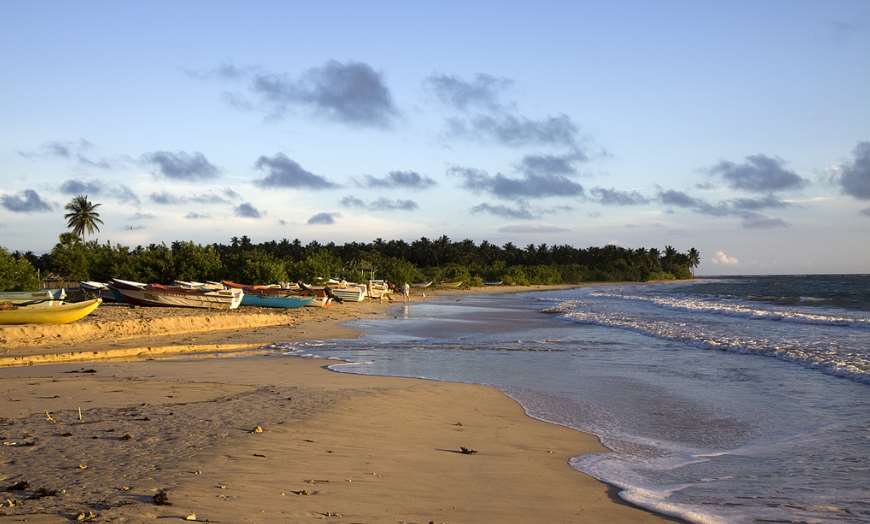 Only an hour’s drive north of Colombo, Negombo is a large and important city in Sri Lanka that features a picturesque beach popular with both locals and visitors. Due to its proximity to the international airport, it is a popular area for travellers to rest after their long-haul flight, unwind and acclimatise before heading off to explore Sri Lanka. Although mainly a transit destination, Negombo offers some beautiful architecture and a charming ambience that is worth discovering. The city’s heritage is still visible throughout including the remains of a 17th century Dutch Fort that lines the waterfront, pastel-coloured Portuguese catholic churches and impressive Buddhist temples and murals. Negombo is also home to a lush large lagoon framed by mangroves, coconut groves and paddy fields. It is an important fishing site which feeds Negombo fish market, one of Sri Lanka’s largest. Negombo Beach is another highlight; stroll along the shore, barter in the artisan souvenir shops and relax on the golden sands. Come evening, enjoy the spectacular sunsets and discover the myriad of beachfront restaurants and live music bars that pepper the seaside promenade. 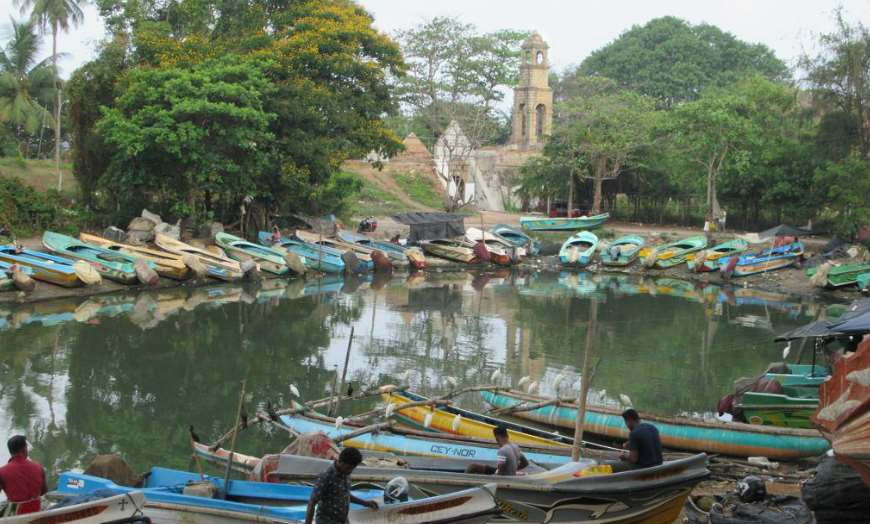 Known as the ‘City of Gems’, Ratnapura is the gateway to Sri Lanka’s hill country where you will pass emerald paddy fields, expansive tea estates and working rubber plantations. Perhaps most famous for its wealth of gemstones, Ratnapura has a rich history of mining some of the world’s most precious stones. Here you are able to visit the Gem Museum, or explore some of the regions gem workshops or mines where you can see various coloured jewels and learn about the history and methodology of the industry. Ratnapura is also a good starting point to tackle the soaring summit of Adam’s Peak. Standing at an impressive 2,243m tall, this striking natural landmark is shrouded in mystery and legend has it that at the peak lies the footprint of the Buddha himself. No wonder it is one of he most celebrated places of pilgrimage in Sri Lanka.

About the TEAM @ PLK

Team Parcel Lanka is here to aid, with all the necessary knowledge about cargo and courier logistics in Sri Lanka

Reach us out on our dedicated Domestic Hotline to set up an account and start shipping your Ecommerce and Cash On Delivery packages, locally and worldwide